skip to main | skip to sidebar

What is a hottentot apron? 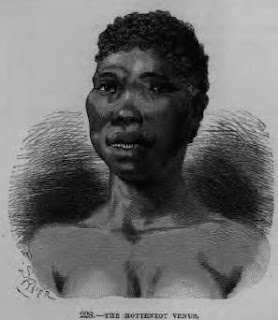 Saartjie Baartman was a young woman from South Africa's Eastern Cape region, brought to London in 1810 as a representation of African womanhood. You may know her as the "Hottentot Venus" and if you do you will understand her as a historical figure known for her large and jutting bottom.

However Saartjie had another feature which fascinated Europeans. This was her pendulous inner labia, which clung together between her legs giving the appearance of a curtain or apron of skin. They were (and still are) a common feature in the Khoisan community, and may have been enhanced by manual stretching; a means to enhance sensation which is still practised in Africa and elsewhere.

Europeans had labelled the Khoisan as the 'Hottentots' in reference to the sound of their language, and they coined the term 'Hottentot Apron' in the 18th century to reference the distinctive labia minora seen among their women. The apparent mildness of this term belies the intense prejudice with which this feature was generally viewed. White doctors had decided that so called 'hypertrophic labia' were the sign of a moral deviant and this trend continued as white explorers sought to link voluptuous African bodies, high sexual appetite ('lascivity'), and racial inferiority.

Once in London Saartjie found herself put on display semi naked (with genitalia hidden only by a veil) as part of a sideshow which began with her emerging from a cage. The tickets sold quickly to a public eager to see the genitals they'd heard looked like the skin hanging from a turkey's neck and the right angled bottom which was caricatured in so many pictures. They crowded in, keen also to confirm their beliefs about the sexual savagery of the so called 'negroid race'. Some shouted abuse, others reached to prod her, or craned their necks to see round the veil and catch a glimpse of those labia... 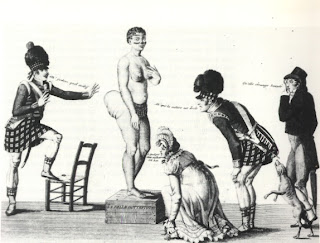 The aristocracy were equally revolted... so much so that they arranged their own private viewings.

After some time on display in Britain, and increasing controversy around her treatment, it seems Saartjie was sold  to the owner of a French travelling circus. She endured a new round of public appearances in Paris, eventually attracting the interest of Napoleon's Surgeon General. In the final indignity, after her death in 1815, he pickled her genitalia and put them on display in the Musée de l’Homme in Paris; alongside her skeleton, a cast of her body and her bottled brain.

The obsession with Saartjie's voluptuous bottom and genitalia was still going strong over 70 years later, as this comment by G.M.B Maughs illustrates: "So entirely brutal are the bodily formation and physiognomy of this Hottentot female, that a female gorilla would scarcely make a less desirable bed-fellow." ( St Louis Courier of Medicine, 1887)

Her remains were on display in Paris until the 1970s. In fact it took the intervention of Nelson Mandela - and years of negotiation between the French and South African governments - before her bones, brain and labia were returned to her home country. What was left of Saartjie was finally buried by the Gamtoos river in the Eastern Cape on 9 August 2002, South African Women’s Day.

To read more about Saartjie and the racist and misogynistic roots of the term 'hypertrophic labia'  I suggest the paper, McNamara K.R. Genital Plastic Surgery and the Production of the Sexed Female Subject, which can be accessed at http://gnovisjournal.org/files/Karen-Roberts-McNamara-Pretty-Woman.pdf